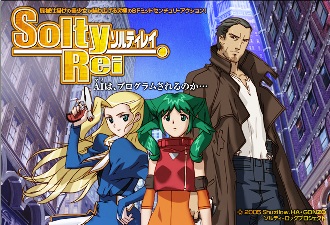 Solty Rei is a manga and 26-episode anime series that follows Roy Revant, a widowed bounty hunter who captures criminals for the Maverick Hunters agency (not that one), in a city where a phenomenon called the Aurora Shell prevents air travel (anything approaching is struck by lightning) and interferes with electronics. Then, Roy's rather unhappy life is inverted when an unusual girl named Solty literally falls into his life...