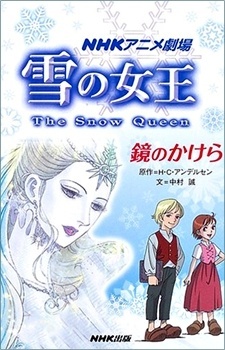 The Snow Queen (Yuki no Joou) is a 2005 anime by TMS Entertainment and directed by the late Osamu Dezaki.

Like in the original story, Gerda and Kai are childhood friends and neighbors living in a small town, playing and preparing with their families for an incoming winter. In the meantime, the Snow Queen proceeds with her annual summoning of snow and ice, leaving the Ice Palace in care of her subordinate trolls. During one of her outings, the giant Magic Mirror shatters and its shards are blown away all over the world, including their hometown. Kai’s eye is pierced by one such shard and soon his demeanor begins changing, to the point of driving Gerda away in tears. One night, the Queen sees him and decides to take him away to her castle all while Gerda is helpless to do anything about it.

When the villagers and Kai’s family give up the search and hold a funeral for him, Gerda cannot shake off the feeling that Kai is still alive, remembering her dream about Kai going off in a white carriage. She eventually encounters the town drunk who saw the same thing as she did in her dreams and decides to travel north in order to find him. She meets many people on her journey, including a mysterious minstrel Ragi and his animal companions who join Gerda in her search.