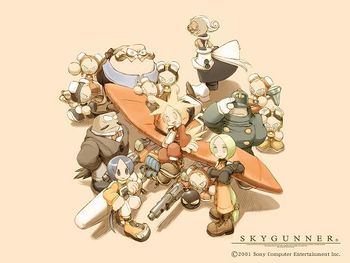 In some parts of the world, there are those with a job unlike any other. They are owners of special aircraft and guns and are commonly known as "Gunners." The setting is the town of Rive, where an exhibition is to take place in two months time. What adventures await these Gunners?
Advertisement:

SkyGunner is a PlayStation 2 shooter with Flight Simulation elements, released by Atlus, taking place in a Steampunk-like world where everyone, oddly enough, has ponytail... er, tails.

The game stars three "Gunners" (pilot mercenaries for hire): Ciel (a happy-go-lucky Gunner), Copain (Ciel's best friend, a very "Let's get 'em!" kind of guy), and Femme (a hired pilot from out of town, come to guard the Expo). They are stationed in the island town of Rive, where an exhibition is about to take place. The exhibition is for the "Eternal Engine," an engine of infinite power. Of course, someone just has to screw up the whole thing and that someone is the criminal genius, Ventre. He's plotting to steal the Eternal Engine for himself, and Hardi, the chief of police, dispatches the Gunners to stop him.

Each character is armed with a pair of machine guns (that shoot... money??) and also have his or her own aircraft, special ability, attributes, and even difficulty (Ciel is Normal Mode, Copain is Difficult/Hard Mode, and Femme is Easy Mode). Selecting a Gunner takes you through his/her side of the story, often teaming up with all three characters is some stages in races to see who gets the most cash from taking down everything from small ships to big hulking mecha and battleships. Cue many, many explosions. And it's entirely done in anime-style.

Something not many people know: EasyGameStation made a game called Gunner's Heart that acts as a slightly downgraded PC port of the game, with more rudimentary cutscenes, but with the plot and characters completely unaltered from the PS2 original.