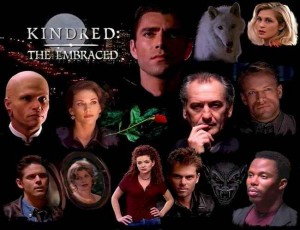 We're all around you.
Advertisement:

Kindred: The Embraced is an obscure and short-lived supernatural drama produced by Spelling Television and John Leekley Productions. The show is a loose live action adaptation of White Wolf's popular Tabletop RPG Vampire: The Masquerade and ran on Fox from April to May of 1996.

San Francisco police detective Frank Kohanek (C. Thomas Howell) suspects influential businessman Julian Luna (Mark Frankel) of being heavily connected to the mob and is deadset on bringing him in. While investigating the homicide of Julian's bodyguard on a lead from an anonymous tipster, Frank discovers, through the actions of his girlfriend Alexandra, the secret society of vampires, or "kindred" as they call themselves, that have taken up residence in the city. Unfortunately, kindred law states that telling a human about the existence of vampires is punishable by death. And Julian just so happens to be the leader, or "prince" of the kindred and the one responsible for carrying out that sentence. By the end of the 1st episode, the two men are at odds with each other, with Frank vowing to kill Julian for what he has done. Thankfully, the two get over it really quickly after the death of a mafia informant at the hands of Eddie Fiori (Brian Thompson), the traitorous leader or "primogen" of the Brujah clan. The two form a tentative alliance to take down Fiori and prevent a war between the 5 vampire clans.

Kindred was cancelled by Fox after only 8 episodes. Efforts were made by a US cable network to continue production of the series, but this was abandoned when series star Mark Frankel was killed in a motorcycle accident in the fall of 1996.

Critics tend to describe the show as a mix of The Godfather and Melrose Place... with vampires. Due to the numerous changes and "sanitization" of the game's elements for mainstream television, there is a noticeable divide between fans of the game and fans of the show. Some are fans of both.