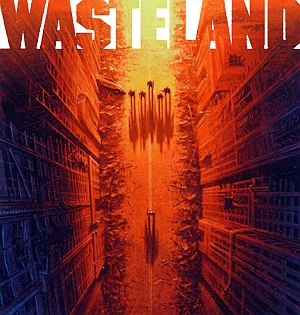 PLAYER is reduced to a thin red paste.
"Your life has ended in the wasteland."
Advertisement:

Wasteland is a 1988 CRPG that was groundbreaking in its combination of a gritty post-apocalyptic setting with a nonlinear play style. Notably, the designers sacrificed more modern graphics for extended detail in the gameplay and created a rich backstory that appeared in the game's Copy Protection — a "Paragraph Book" which contained necessary and plot-relevant information, with passages being referenced by number at various points in the game. Woven into the book were numerous Red Herring entries that were never referenced in-game, in order to keep players from skipping to the end of the story.

The game's story takes place in 2087, generations after a global nuclear war in 1998 destroyed most of civilization. In what was once the Southwestern United States, the Desert Rangers — a remnant of the US Army Corps of Engineers — are valiantly trying to keep the peace and enforce some semblance of law and order for the people of Arizona. As the story begins, a small squad of Desert Rangers have been deployed by Ranger HQ to investigate some strange disturbances near the old California/Nevada border. As they scout the area, the Rangers discover evidence of a larger menace threatening to exterminate what is left of humankind...

Celebrated on several sites, most notably at the Ranger HQ Grid,

which, as well as having info about the game, has some surprisingly good Fan Fic.

An enhanced version of the original Wasteland with smoothed out depixelized graphics, optional music, voice-overs and an integrated paragraph book has been released on Digital Distribution sites (including Steam and GOG.com) in order to coincide with the release of its 2014 sequel, Wasteland 2. A full remastered version with 3D graphics, mouse controls, and illustrated cutscenesnote despite these fancy graphical and UI upgrades, the game plays pretty much identically to the original version; despite being built on an entirely new code base, in gameplay terms it feels very much a remaster and not a remake was released on February 25, 2020, a few months prior to the third entry in the series, Wasteland 3.