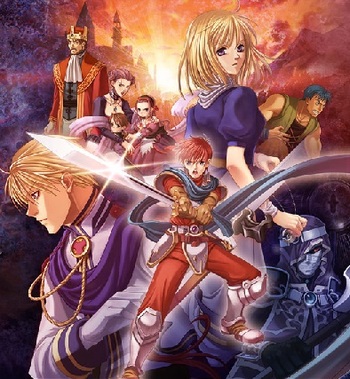 Adol, saving the world again for the third time.
Advertisement:

Ys: The Oath in Felghana is a Video Game Remake of the third game of the Ys franchise by Falcom, Ys III: Wanderers from Ys, released on the PC in 2005, then ported to the PlayStation Portable in 2010 by publisher XSEED Games, with a worldwide release on the Steam platform available in 2012.

Set three years after their adventures in Esteria during Ys: Ancient Ys Vanished ~ Omen and the titular Ys in Ys II: Ancient Ys Vanished – The Final Chapter, series protagonist Adol Christin continues in search of adventure with his traveling companion Dogi on the continent of Euresia. When they come across a gypsy caravan, Dogi decides to have his fortune told, only for the fortune teller to give an ominous vision regarding Dogi's homeland of Felghana, warning them to stay away from there. Being the adventurers they are, the duo decides to pay a visit to Dogi's hometown of "Redmont", ruled by the greedy Count McGuire. Upon arriving, they save Dogi's Childhood Friend, Elena Stoddart, from monsters and soon learn of McGuire's mistreatment of the citizens and a plan to revive an ancient evil.

While the original Ys III was a side-scrolling Platform Game akin to Zelda II: The Adventure of Link, the remake replaces it with the 3D Action RPG game-play seen in Ys VI: The Ark of Napishtim, while expanding the original story and dungeons.

Ys: The Oath in Felghana show examples of: