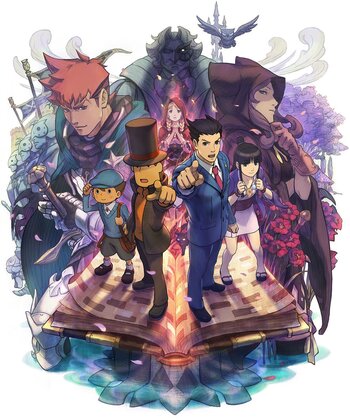 The greatest minds team up for the first time.
"OBJECTION! Professor, there is a huge contradiction in your argument!"
— Phoenix Wright, from the game's first trailer

Professor Layton vs. Phoenix Wright: Ace Attorney is a Nintendo 3DS title by Capcom and Level-5, which is a Crossover between the Professor Layton puzzle games and the Ace Attorney courtroom adventure series. It was released in Japan on November 29th, 2012 and later localized to Europe on March 28th, 2014. It came to US shores later that year on August 29th. It is the first Ace Attorney game since Apollo Justice: Ace Attorney back in 2007 to feature the involvement of original creator Shu Takumi.

After getting involved in mysterious incidents in London, Professor Layton and his apprentice Luke Triton, as well as the visiting defense attorney Phoenix Wright and his assistant Maya Fey, find themselves transported to the Medieval European Fantasy town of Labyrinthia. This town is ruled by a mysterious figure known as the Storyteller, who seems to command the townspeople's destiny through his writing. The people of Labyrinthia live in fear of witches in their midst, who are regularly hunted down by the Inquisition and tried in witch trials, with the guilty parties sent into a pit of fire.

Layton, Wright, and their respective friends seek the truth behind the incidents of witchcraft, as well as the secrets of Labyrinthia itself, each in their own ways. Investigation segments run similarly to the Professor Layton games, with the protagonists exploring the town, talking to people, and solving puzzles along the way. Trials are conducted in the manner of the Ace Attorney series, with Phoenix Wright taking up the defense of an accused witch (except for the prologue trial, which takes place in a normal British courtroom), cross-examining witnesses, and searching for contradictions to expose the truth. Trials in Labyrinthia have a new twist, in that multiple witnesses can appear on the stand at once, allowing Phoenix to spot reactions by one witness to another's testimony. (This element would later appear in the The Great Ace Attorney side series.)