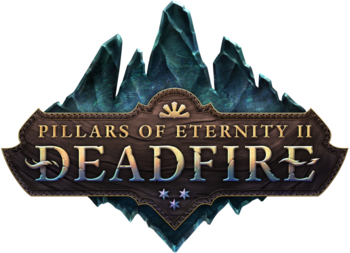 Hunt a god. Save your soul.
"To live is a choice, and you yet draw breath. Drink deep of the air, Watcher. We have work yet to do."
— Berath
Advertisement:

that reached its initial goal in the first day, and raised up to $4.4 million by the Fig campaign's end. It was released on May 8, 2018.

It's been five years since the Hollowborn Crisis ended. Since you and your companions parted ways. But a Watcher's work is never done. Eothas has returned. The god of light and rebirth was thought dead, but he now inhabits the stone titan that sat buried under your keep, Caed Nua, for millennia. Taking place in the Deadfire Isles, the game once again stars the Watcher, who must now track down the god Eothas after he destroys Caed Nua, nearly killing you in the process. To save your soul, you must track down the wayward god and demand answers — answers which could throw mortals and the gods themselves into chaos. The Watcher's search brings them to the Deadfire Archipelago, where four factions struggle against one another for full control of the region, and legends abound of a lost city surrounded by magical storms, filled with riches for anyone capable of plundering it.

The gameplay is largely the same as the original, with the addition of multiclassing. The world is also be more dynamic, with weather and NPCs moving around carrying their own business. The game director, Josh Sawyer, has also stated that one focus of Deadfire was to address criticisms raised over the abundance of filler combat encounters in the original game.

In addition, Obsidian released three pieces of story DLC throughout the latter half of 2018:

In 2020, Obsidian announced Avowed, a first person action RPG set in the world of Pillars of Eternity.

or characters using a scepter or rod capable of dealing with them. Hope you brought one along.