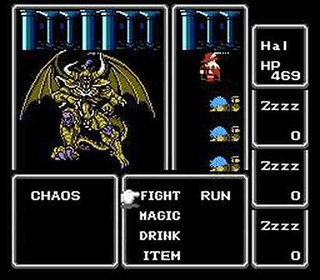 A variation of the Self-Imposed Challenge restricted to games with multiple controllable characters, like RPGs or strategy games. The player selects one character from the roster and completes the game using only that character, with all the others being restricted to a support role, perpetually dead, constantly blocking, or just ignored.

The difficulty level for this kind of run can vary wildly, depending on the character and the game. For example, RPGs frequently divide the experience gained from fights evenly among the surviving characters, which means that a solo character can gain levels very quickly early on, thereby breezing through the early game. However, later on, exponential requirements for gaining levels mean that the character is not nearly so relatively powerful compared to a full-on party. There are also many cases where enemies can induce deadly status effects on party members (such as zombie, stone, or instant death), which can be easily rectified in normal playthroughs by having other party members heal the afflicted character, but in solo challenges are as good as a Game Over.

For some games, this is not strictly possible because the character is either not in the party or not able to perform a technique required to advance the plot at certain points in the game. For these games, the variation is to use only that character in all situations where the game allows it, and use the bare minimum skills from the other characters when compelled to by the plot.

Not to be confused with Solo Sequence, in which single-character play is temporarily enforced. A character class (supposedly) designed to facilitate this kind of play is a Solo Class.

In order to avoid crowding this page, please do not add more examples that are just "this game has multiple controllable characters, but you can complete it with a single one". Rather, examples should be games where a solo run is either a) a markedly popular challenge among the player-base or b) acknowledged by the developers in some way (achievement, game mechanic to facilitate it, etc.)