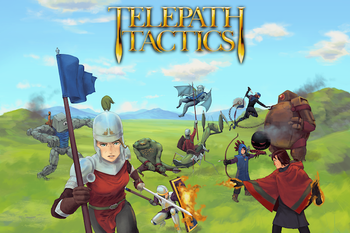 Telepath Tactics is the fourth entry in the Telepath RPG series. It is markedly different from its predecessors, using a brand-new engine that adds much more depth to battles and ditches the old top-down vector graphics (a long-standing complaint about the series) in favor of more standard pixel graphics. It also departs from its Western RPG roots; it is instead a more focused Tactical RPG, with a very linear plotline and minimal free exploration segments. The primary focus of the game is, in fact, on competitive multiplayer; the single-player campaign was not even part of its original conception, and was added midway through development.
Advertisement:

Unlike contemporary Tactical RPGs such as Fire Emblem and Battle for Wesnoth, Telepath Tactics uses mostly deterministic algorithms in its battles: attack damage is constant, and dodging attacks is relegated to a special ability possessed by only a few classes. The setting, a new region called the "Dundar Archipelago", also uses a Steampunk aesthetic rather than typical Swords and Sorcery fantasy. Typical matches allow the player to choose from a selection of 24 classes, most of them similar to the classes in the earlier spinoff Telepath Psy Arena 2. Most classes are defined by their Weapon of Choice — spearmen, crossbowmen, swordsmen, etc. — but the series' nonhuman races and trademark psy fighters are also available, now in four variants for each of the Elemental Powers. The game also introduces a completely new species to the setting: "lissit", insular Lizard Folk who fight with maces.

The single-player campaign, titled The Vengeance of Emma Strider, details the story of two sisters who were enslaved by a shadowling mining company, but managed to escape when they were still young. They are taken in by a lissit tribe, and when they grow to adulthood, they resolve to return to the mines, free the slaves, and rescue their father, who they left behind in their first exodus. While the plot itself lacks the depth of its predecessor, it is notable for having a female-dominated cast and an anti-imperialist narrative with a personal focus, two features that are uncommon in most Tactical RPGs.

Telepath Tactics also features modding capabilities, including the ability to create your own campaigns, but so far no fan-made campaigns have been completed.