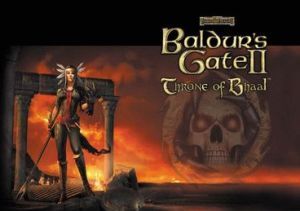 Baldur's Gate II: Throne of Bhaal is a 2001 expansion pack for Baldur's Gate II, the second game of the Baldur's Gate series. Unlike the expansion pack for the first game, this one continues the saga's main storyline, bringing it to its grand conclusion. It's large enough that some people at BioWare joked that they might as well just call it "Baldur's Gate III"note in fact, it was originally planned as such, before being converted into an Expansion Pack; the actual BG3 wouldn't get made for another couple decades.

The expansion provides examples of the following tropes: