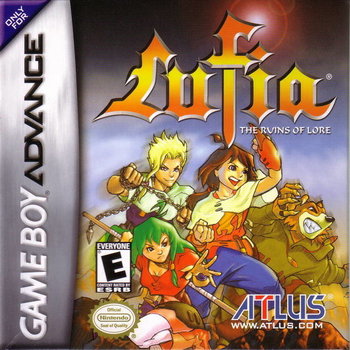 The power of the gods... Where will it lead those who seek it? The path to prosperity... or the road to destruction?
Advertisement:

Twenty years have passed since Maxim and his team of adventurers defeated the Sinistrals. In that time, treasure hunters have begun to seek out the many ruins of dungeons to claim their treasures. A boy named Eldin, following in the footsteps of his father who left home years ago and never returned, is signing up to become the newest of these treasure hunters, but he and his friends are going to be caught up in a much bigger adventure...

Lufia: The Ruins of Lore, known as Estpolis Gaiden in Japan, is an RPG for the Game Boy Advance and the fourth game in the Lufia series. Unlike the other games in the series, it was developed not by Neverland, but by Taito, the original publisher of the first three games. As its Japanese name suggests, it is a Gaiden Game, and while many gameplay elements are derived from its parent series, the plot takes an entirely different direction.

Lufia: The Ruins of Lore contains examples of: