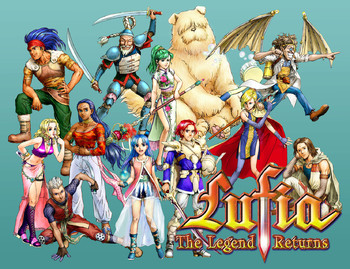 Known as Estpolis Denki: Yomigaeru Densetsu in Japan. Lufia: The Legend Returns is the third installment of the Lufia JRPG series made for the Game Boy Color system by Neverland. It was published by Taito and Natsume in 2001.

The story is a sequel to the first two games, after the previous two Doom Island wars. A traveling fortune teller, Seena, who's on a "great adventure" to uncover the forgotten legend of the Doom Island wars, wanders into a town called Patos and bumps into an idiot swordsman named Wain. At that moment, the Sinistral of Destruction, Gades, awakens and begins destroying a house in the once sleepy town. After the heroic deed of Wain running into the burning home to rescue a girl trapped inside, Seena finds Wain a worthy fellow and asks him to come along her with on an adventure. And thus begins the story.

While being less popular than its predecessors, Lufia: The Legend Returns provides unique battle and character skill growth systems as well as Randomly Generated Levels for dungeons. Players are allowed to put up to nine of the 12 different characters on the battlefield all at once. It also has a good and surprisingly extensive soundtrack, colorful Gameboy Color graphics, and a simple yet classic storyline that is also filled with nostalgic elements from previous games, such as the Dragon Eggs, plus a linear final dungeon, and every single one of the Sinistrals as bosses to date.