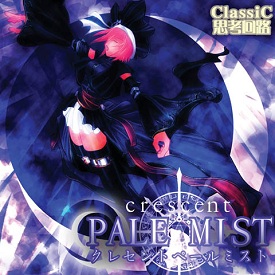 Crescent Pale Mist is a 2½D Hack and Slash / Platform Game hybrid by the doujin circle ClassiC Shikoukairu that's noted for its fierce hack-and-slash gameplay, beautiful 2.5D visuals, and for being really hard.

Its story takes place in the country of Gasyukal, a country of where people seek knowledge of magic, but were foolish enough to stumble upon a forbidden form of magic considered widely taboo. The country's first use of this form of magic was used by ancient sages that ended up destroying an old and distant country, resulting in knowledge of its existence and destructive powers. Later a war broke out, the country of Gasyukal was at a disadvantage, and they were running out of ideas to hold off the enemy forces. Out of desperation, this is where the second time the forbidden magic was used to even the odds... until they couldn't control it and it backfires on them. This resulted in the country of Gasyukal to be pulled from a rift into an Another Dimension, thus turning the countryside into a forbidden no-man's land known as the "Taboo State". Those that try to investigate the Taboo State later ended up dead, without poisoning or trauma, as well as the doctors who examined the corpses and met with the same fate.

Yunou, our heroine of this story, is a magician who is capable of using a deadly and forbidden form of magic known as Pale Mist — the very same Pale Mist that's seeping from Gasyukal — believes there's something more that's causing these deaths. She sets out to seek the source of the Pale Mist and put an end to it, although it's a quest that's easier said than done considering the many dangerous monsters and her former comrades she will confront along the way.

Unlike most doujin action-platformers, the player is not limited to a single 2D plane as Yunou can jump from one plane to another and traverse to other areas (although there are times where you can't go back at all). Yunou can take down foes with her blade for close-ranged attacks, cast powerful Pale Mist magic like Rowanveld, and a bottomless supply of throwing daggers for good measure. Along the way, Yunou can find items and artifacts scattered throughout Gasyukal to enhance her abilities, provide hints towards her treasure-hunting, and unlock extra difficulties and other features. To make it through the Taboo State, Yunou will have to utilize every trick she's got under her detached sleeves.

The game was first released on PC in Japan on March 30th, 2006, it was then later localized by Rockin' Android as a downloadable PlayStation 3 game via PlayStation Network on November 9th, 2010 with updated graphics, redrawn character art, online leaderboards, Trophies, and a few gameplay tweaks. On January 2015, the game has been greenlit

for a Steam release with added features such as Achievements and trading cards, however, it seems unlikely this will come to pass as the game has been stuck in Steam Greenlight limbo for years since. The game was also delisted

from PlayStation Network on November 9, 2015 along with other games published by Rockin' Android.