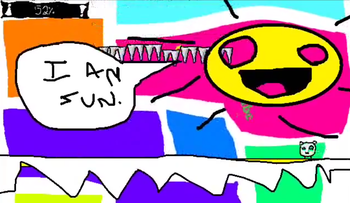 is a downloadable game by Hubol Gordon of Terrible Productions, released on December 4, 2009 after nine months of making it. Hubol himself compares it to having a baby.

The story is as follows: You are a small rodent-like critter who constantly glitches out, and you are exploring the vast world around you. Over the course of the game, you will fight weird bosses and monsters, gain awesome power-ups, and eventually unravel the secret of why you are here.

raocow has done a Let's Play of this game here

A Spiritual Successor was released in 2014, dropping the Craz'd part of the name but keeping the number 2.

Compare to An Untitled Story.

Craz'd! has the following tropes: