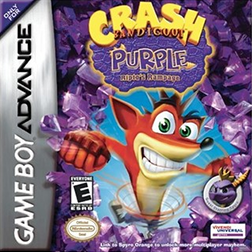 The tenth game in the Crash Bandicoot series, released in 2004 for the Game Boy Advance, and the final game in Vicarious Visions's trilogy of Crash platformers on the GBA. This game is a crossover with the Spyro the Dragon franchise. Also known as Crash Fusion in Europe. Ripto's Rampage received a mixed-positive reception, with its length and polarizing mini-games often cited, but it was slightly better received than its sister game Spyro Orange: The Cortex Conspiracy.

Spin-offs aside, Ripto's Rampage was followed on the GBA by Crash of the Titans in 2007, with a new developer and many gameplay and graphical changes to match. Vicarious Visions helped win back the crowd for the Crash series in 2017 via the hit console remaster Crash Bandicoot N. Sane Trilogy.