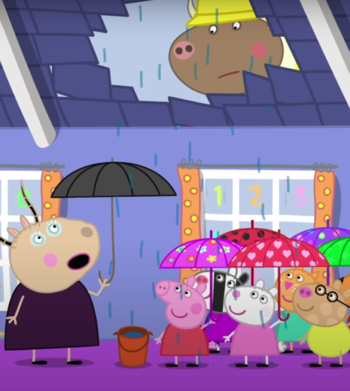 It's pretty, it's homey, and it has a great view...thanks to the huge, gaping hole in the wall and/or ceiling.

A comedy trope, in which—whether because of a natural disaster, super heroics, stranger shenanigans, unnecessarily dynamic entry, vehicular mishaps, etc.—the characters have their home or place of business partially carved out and exposed, and are forced to live that way for at least a scene or two. Expect some bad weather to naturally show up at some point.