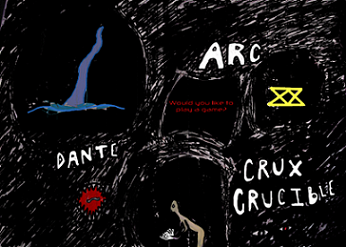 A mere fraction of what goes on in the game
Would you like to play a game?
— CRUX

On September 13th, 2011, an email was sent to several members of Slender Nation inviting them to play a game. The sender, CRUX_crucible said the game would begin on October 1st, and encouraged those who recieved the email to spread the word. A thread was posted about it on Slender Nation, and several members agreed to join.

Shortly after, someone named D started a blog vowing to find out about CRUX and to stop his games, and a mysterious third party, ARC, who seems to have a connection to CRUX, revealed himself.

Then some shit went down, and the rest is merely an issue of who is dead, and who becomes the next servant of the TREE.