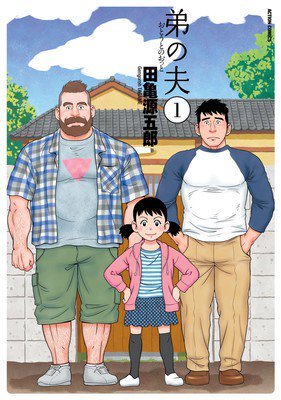 Canada is known throughout the world for its majestic bearsnote From left to right: Mike, Kana, and Yaichi.
My Brother's Husband (Otōto no Otto) is a domestic dramedy manga series by Gengoroh Tagame. It is the first family-friendly work by Tagame, previously known for his Bara Genre gay male erotic manga. It was originally serialised in Monthly Action magazine in 2014-7, and published in official English translation in two volumes (double the length of the volumes of the four-volume Japanese collections) in 2017-8 (an oversized single-volume edition came out in 2020). A live-action TV adaptation was broadcast in 2018 on NHK BS Premium.
Advertisement:

The series is a Culture Clash comedy dealing with the similarities and differences between Japanese and Western attitudes to gay men, with a dual audience of Japanese people, and Western manga fans who, thanks to reading Yaoi, may have an unduly romanticised view of what life in Japan is like for gay people.

The manga's main character is Yaichi, a stay-at-home single dad whose gay twin brother, Ryoji, emigrated to Canada years before and became estranged from him. His quiet life with his tween daughter Kana is disrupted when Mike, Ryoji's widower, comes to Japan to meet his in-laws and explore the country.

My Brother's Husband contains examples of: