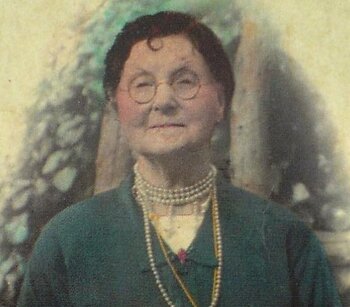 Not pictured: several professional writers laughing behind her back

.
Have you ever visited that portion of Erin's plot that offers its sympathetic soil for the minute survey and scrutinous examination of those in political power, whose decision has wisely been the means before now of converting the stern and prejudiced, and reaching the hand of slight aid to share its strength in augmenting its agricultural richness?
—Opening lines of Delina Delaney
Advertisement:

Anna Margaret Ross (8 December 1860 - 2 February 1939), known by her Pen Name Amanda McKittrick Ros, was an Irish writer. She wrote poetry and a number of novels, publishing her first novel, Irene Iddesleigh, in 1897.

She was born in Drumaness, County Down, on 8 December 1860 and was christened Anna Margaret McKittrick on 27 January 1861. Some time in the 1880s she attended Marlborough Teacher Training College in Dublin, was appointed Monitor at Millbrook National School, Larne, County Antrim, finished her training at Marlborough, and then became a qualified teacher at the same school.

In her first visit to Larne, she met Andrew Ross, a widower who worked as a station master there. They married on 30 August 1887, and Andrew financed for the publication of his wife's first novel, Irene Iddesleigh, thus starting her literary career. She took the Pen Name Amanda McKittrick Ros and went to write two more novels and a number of poems.

She died on 2 February 1939 at the Royal Victoria Hospital in Belfast, after receiving injuries from a fall.

Ros's literary work was not widely read and is considered to be So Bad, It's Good, due to its Purple Prose. The Inklings, a group of authors whose names included J. R. R. Tolkien and C. S. Lewis, held contests to see who could spend the most time reading her works without laughing.

Tropes that apply to Ros and her work: