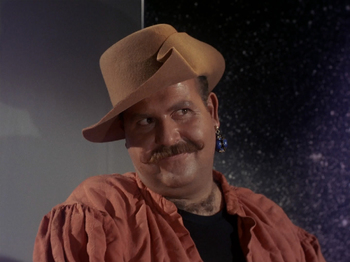 Harcourt Fenton Mudd, aka Harry Mudd. Bad guys were anything but subtle in the '60s.
Advertisement:

The Enterprise is in pursuit of a small vessel. The vessel is destroyed but Scotty manages to beam off the "crew," which consists of "entrepreneur" Harry Mudd and three captivatingly beautiful women. It turns out the three women are not so much crew as cargo; they were going to be wives for settlers. But the Enterprise sustained damage during their pursuit of Mudd's ship, forcing Kirk to head for a mining colony for more lithium crystals.