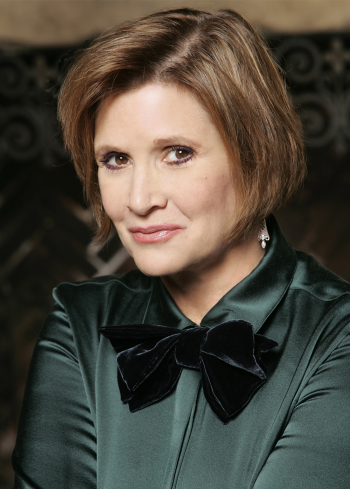 "Movies were meant to stay on the screen, flat and large and colorful, gathering you up into their sweep of story, carrying you rollicking along to the end, then releasing you back into your unchanged life. But this movie misbehaved. It leaked out of the theater, poured off the screen, affected a lot of people so deeply that they required endless talismans and artifacts to stay connected to it."
— Carrie Fisher talking in her memoir The Princess Diarist about A New Hope.
Advertisement:

Carrie Frances Fisher (October 21, 1956 – December 27, 2016) was an American actress and writer born in Burbank, California. She's most famous for starring as Princess Leia Organa in the Star Wars saga. She also starred in Shampoo, The Blues Brothers, Under the Rainbow, Amazon Women on the Moon, Hannah and Her Sisters, When Harry Met Sally..., and Drop Dead Fred.

Of course, she was Hollywood royalty well before Star Wars was made, being the daughter of the late singer Eddie Fisher and the late actress Debbie Reynolds, whose late '50s divorce was one of Hollywood's most infamous scandals of the time, as her father had an affair with Elizabeth Taylor. Fisher herself was briefly married to Paul Simon.

In her later career, she was primarily focused on her work as a writer, having penned such books as Postcards from the Edge (which was made into a 1990 film starring Meryl Streep and Shirley Maclaine), Delusions of Grandma, and Surrender the Pink. She also wrote and performed Wishful Drinking, a one-woman play about her life. Rounding it all off, Fisher was one of the most in-demand script doctors during the 1990s, being hired to punch up such films as Hook, Sister Act, and all the Star Wars prequels.

Oh, and she owned the only official copy of The Star Wars Holiday Special, which George Lucas gave to her in exchange for doing the audio commentary for A New Hope. She mostly used the video to evict house guests. By her own admission, she often gave no fucks about anything and spent life just living it.

Fisher died on December 27, 2016 at the age of 60, after going into cardiac arrest during a transatlantic flight four days earlier. Her mother died the next day, her last words being "I want to be with Carrie."

In her book Wishful Drinking, she wrote about her eventual obituary: "I want it reported that I drowned in moonlight, strangled by my own bra." Sure enough, several obituaries and retrospectives featured the line. She was cremated and her ashes were placed in a giant novelty Prozac pill she'd bought a few years earlier.

Actress Billie Lourd, who appears in the Star Wars sequel trilogy as Lt. Connix, is Fisher's only child.