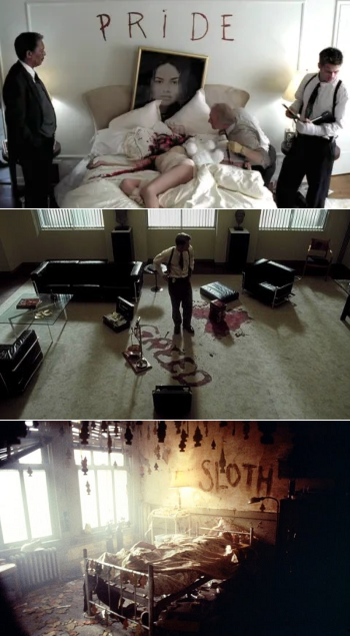 I'm sensing a theme here.
Moss: If you were a murderer, what would your nickname be? Mine would be "The Gardener" cause I'd always leave a rose at the scene of the crime.
Roy: What would your murder weapon be?
Moss: [beat] A hammer.
— The IT Crowd
Advertisement:

No, he has to pattern his kills after a famous set, like the seven deadly sins, or a work of fiction. The killer will choose victims who match up with the set and/or he will kill them in manners befitting the set. Note that the killer will avoid repeating methods of murder: each death will represent, in some way, another portion of the set or story.

The motives of the killer for choosing the set can vary. If the motive is revenge or punishing a sin, then the killer is also a Poetic Serial Killer. Compare Idiosyncrazy.