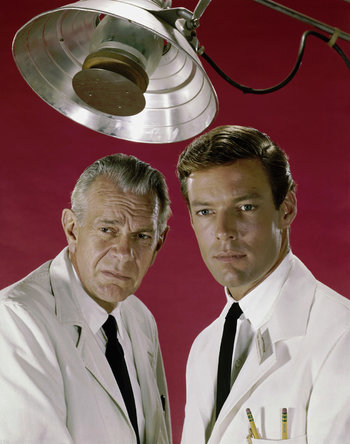 From left to right: Dr. Gillespie (Raymond Massey) and Dr. Kildare (Richard Chamberlain)
"Our work is to keep people alive. We can't tell them how to live any more than how to die."
— Dr. Gillespie
Advertisement:

The prior success of the Dr. Kildare character in literature, film, and radio inspired MGM to bring the franchise to television, which resulted in one of the most popular Medical Dramas of the '60s.

Dr. Kildare, which aired on NBC from 1961–66, starred Richard Chamberlain as Dr. Kildare and Raymond Massey as Dr. Gillespie. Though inspired by its previous incarnations, the TV series was more or less In Name Only. The series centered around James Kildare, a gifted young intern specializing in internal medicine at fictional Blair General Hospital under the guidance of senior doctor Leonard Gillespie. Throughout the series, Gillespie warns Kildare to not get personally involved within his profession, but the handsome young doc always managed to ignore his mentor’s advice. In the third season, Dr. Kildare becomes a resident, and from there, he continued to develop from naïve intern to confident physician.

One of the first major hits from MGM Television (it was in the Nielsen top 20 for its first 3 seasons), it catapulted the then-unknown Richard Chamberlain to instant stardom and Teen Idol status. Dr. Kildare was among the first medical series with mainstream popularity (alongside ABC's Ben Casey), and helped to spread awareness of various medical subjects and diseases, many of which were never represented on television before. A myriad of major Hollywood guest stars would also pay a visit to Blair General Hospital during its five-year run.

For its final season, in an effort to boost its sagging ratings, the show was retooled from an hour-long black-and-white drama, into a twice-weekly half-hour serial produced in color. It also introduced a new series regular, Nurse Zoe Lawton (played by Lee Kurty), as a potential love interest for Kildare. All of these changes led to some Later Installment Weirdness, which the show never recovered from. The series was cancelled in 1966. Nevertheless, the TV adaptation of Dr. Kildare significantly influenced every medical TV series that came after it.