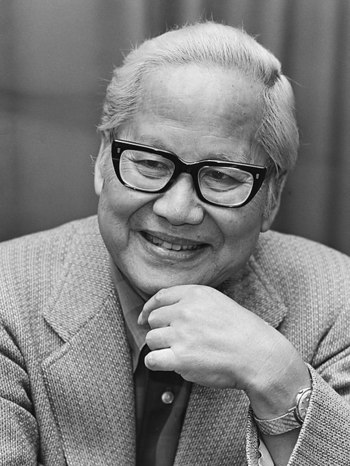 Before there was Bruce Lee, there was Keye Luke.
"I was extremely lucky, I started at the top. My very first picture was with Greta Garbo, so I never had to say to my agent, 'Please get me a part where I have a speaking line' - I never had that type of strain and worry - I was a featured player right from the beginning."
Advertisement:

Keye Luke (June 18, 1904 – January 12, 1991) was a Chinese-born American actor who was a mainstay in Hollywood as its representative Asian for decades. While he never reached the heights of Sidney Poitier in general or Bruce Lee for Asians, as a breakthrough star, Luke was doing his bit for minorities decades before Poitier entered the scene, including being a founding member of the Screen Actors Guild.

Luke got started as a graphic artist, which included doing murals at Grauman's Chinese Theatre and artwork for the press book for King Kong.

This drew him the attention of filmmakers and he got his start in acting, most famously as Lee Chan, the Number One Son of detective Charlie Chan. Although that film series would rightly be faulted for the lead character being played by a white man in Yellowface and Lincoln "Stepin Fetchit" Perry Lincoln's Uncle Tomfoolery, Luke and the other Asian actors playing Chan's family got to shine as all-American kids with Lee even getting to be an Olympic Gold Medalist in Charlie Chan at the Olympics.

With that start, Luke left to have his own career which included playing Kato in The Green Hornet Serials and playing the title character as Detective Wong in what he hoped would have been his big role in Phantom of Chinatown in 1940, which sadly flopped. Regardless, Luke would work regularly with various studios for the rest of his career with appearances in series like Star Trek: The Original Series and The F.B.I..

By the latter part of his career, Luke had established himself as a character actor of choice with memorable parts, often as a wise Asian mentor like Master Po in the 1970s TV series Kung Fu and feature films like Mr. Wing, the only man who can reliably contain the potentially dangerous Mogwai in Gremlins. He even got to indirectly work with the breakthrough Asian-American star, Bruce Lee, voicing the villainous Mr. Han in Enter the Dragon.

Luke also had a prolific career as a voice actor in animation, which included playing Brak in Space Ghost, Zoltar and The Luminous One in Battle of the Planets and even as Charlie Chan himself, the only Chinese-American actor to do so, in The Amazing Chan and the Chan Clan.