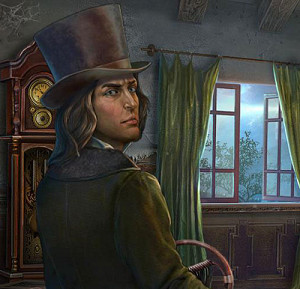 Dark Tales is a series of hidden object games created by ERS Game Studios (now known as AMAX Interactive) and distributed by Big Fish Games. Based on the works of Edgar Allan Poe, the games allow you to play the role of friend and colleague to the master detective C. Auguste Dupin, and assist him as he travels, solving mysteries based on Poe's works. Originally released solely for PC and Mac, most of the series is now also available for iOS devices.

Now has a Character Sheet with tropes specifically about Dupin or the player.

In addition to the main series, Big Fish Games and ERS Studios released Nightfall: An Edgar Allan Poe Mystery, a Freemium game which also featured Dupin. Players could create an avatar for themselves and join his new detective agency, completing hidden object puzzles to solve mysteries in Paris. However, as of August 2015, Nightfall was discontinued; as of 2018, the server has been deleted

and the game is now unplayable.

C. Auguste Dupin appears in the series Worlds Align, an Intercontinuity Crossover between a few of AMAX Interactive's game properties. Dupin functions as a guide for the player, interacting with them directly as they are brought into the game worlds to Set Right What Once Went Wrong. The first game, Beginning

, was released in October 2019; the sequel, Deadly Dream

open/close all folders
Tropes Present Throughout the Main Series
Murders in the Rue Morgue
Advertisement:
The Black Cat
The Premature Burial
The Gold Bug
Masque of the Red Death
The Fall of the House of Usher
The Mystery of Marie Roget
The Tell-Tale Heart
Metzengerstein
The Raven
Lenore
Morella
The Pit and the Pendulum
The Oval Portrait
Speaking With the Dead
Ligeia
The Bells
The Devil in the Belfry
Nightfall