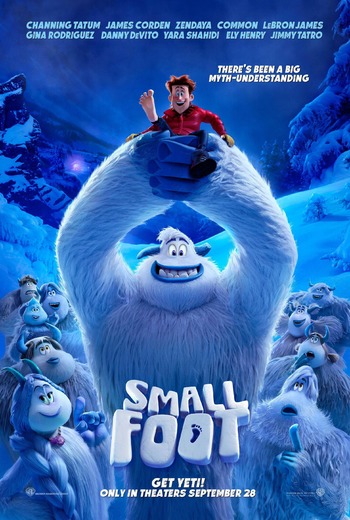 Not every legend is a tall tale.
Stonekeeper: Disobeying the stones is a grave offense. From this day forward, you will be banished from the village. Until you are ready to stand before us all and tell us the truth.
Migo: I am...telling the truth.
Advertisement:

Smallfoot's protagonist is Migo (Tatum), a young teenage male Himalayan Yeti who lives in a small village hidden behind an endless sea of clouds high up in the Himalayan mountains, on Mount Everest. He lives among his people, they tell each other stories about mythical small monsters from the lands down below, creatures they simply know only as "Smallfoot". Until one day that will possibly change his entire life for the better, when he encounters one and finally discovers that Smallfeet are real...

It was released in theatres worldwide on September 28, 2018.

♫ When you're right here beside me
There's nothing else I need
Your eyes keep me reminded
That nothing's out of reach
When you're with me
It feels like I'm finally free... ♫