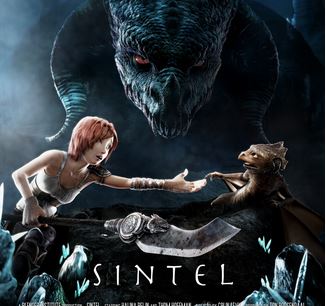 Sintel is a Dutch animated short directed by Colin Levy. It was released in 2010.

A young girl by the name of Sintel (voiced by Halina Reijn) befriends an injured baby dragon, who she calls Scales, only to have it snatched away one day by another adult dragon. She goes on a quest to reclaim her friend and endures many hardships along the way.

The third Blender Foundation movie, made to both drive development and showcase the power of Blender, an open source 3D modelling package. You can watch it here

. Like previous BF movies Elephant's Dream and Big Buck Bunny, the main drive is the visuals. This time, however, the team focused on telling a much richer story, and it shows, having a very deep story for the short run time. There is a rather tragic twist near the end, though, which has a tendency to upset certain viewers.

Example of:
A Boy and His X