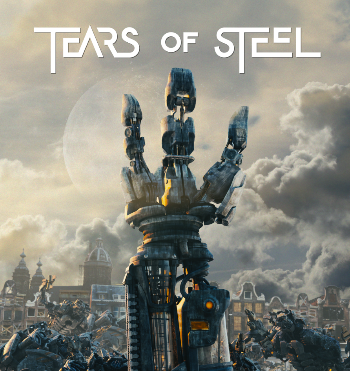 Thom was a young man who wanted to be an astronaut, or as he put it "awesome in space". Celia was his girlfriend, who just wanted to be a "roboticist" — and for him to not be freaked out by her Cyborg Hand. This caused them to break up and go their separate ways — but it still left Celia angry. And with her robots, in a few decades she was capable of taking her anger out on the world. Seeing as these Humongous Mechas are just too tough to defeat, the only apparent means of defeating them is to override Celia's memory of the break up 40 years ago.

The fourth Blender Open Movie project, director Ian Hubert's Tears of Steel differs from the previous Blender Foundation films in that it showcases Blender's motion capture abilities, meaning it is the first Blender film to feature live actors. You can watch it here