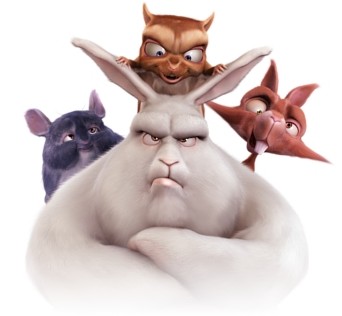 A Gentle Giant bunny who loves nothing better than watching the butterflies is harassed by a gang of nasty little critters, until he's pushed too far...

The second short film from the Blender Foundation after Elephant's Dream, made partly to drive development of Blender, an open-source 3-D authoring software package, and partly to showcase its capabilities. The plot is simple but the characters are quite charming and the whole thing is reminiscent of Pixar shorts of old.

This short is released under Creative Commons Attribution 3.0, and is downloadable here

. Because it's free in all senses, and visually attractive, it's become a standard example clip for showing off what video players can do.