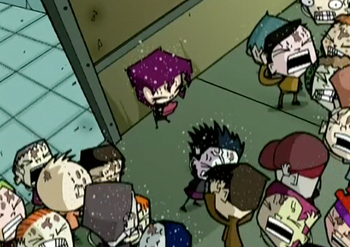 A very special episode about the importance of nitpicking.
"All right, you lousy bunch of bugs. I want to see a nit on every hair in a ten inch radius. Now!"
— General Louse, Arthur, "The Lousy Week"
Advertisement:

Many people have had head lice and nits at some point in their life, typically as a child. They're itchy, embarrassing, and hard to eliminate. If you have them, then it's likely everyone around you does too. In series featuring kids (or featuring people who have kids), the head lice plot serves to make everyone paranoid, uncomfortable, and accusatory of one another. It spreads like a disease, so there are often allegories to pandemics or viruses.

Since lice outbreaks typically happen at schools, expect scenes with school nurses inspecting everyone's hair. Drastic reactions include head-shaving, which solves the issue of lice but leaves one bald. Because girls are more likely to have lice, boys might overreact at first, especially if they catch them. Character who fear or dislike bugs will literally feel their skin crawl and may freak out.

Aside from using lice shampoo and a comb, there's various old remedies associated with the trope. Parents may try coating their child's or their own scalp in things like mayonaise, oil or honey. The liquid, if thick enough, coats the lice's airways and suffocates them.