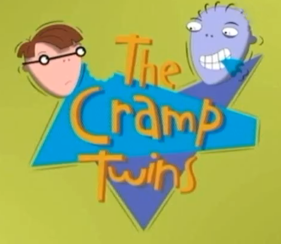 Polar Opposite Twins doesn't begin to cover it.
The Cramp Twins is an animated series created by cartoonist Brian Wood based on a graphic novel of the same name. The show was produced by Sunbow Entertainment and TV-Loonland AG, in association with Cartoon Network Europe. However, for the show's second season TV-Loonland switched production studios from Sunbow to another studio they owned - the UK-based Telemagination.
Advertisement:

It is about Lucien Cramp (Kath Soucie) and Wayne Cramp (Tom Kenny), not-so identical twins who live with their hygiene-obsessed mother (Nicole Oliver) and their Western-obsessed father (Ian James Corlett) in the fictional town of Soap City, where cleanliness is a way of life and any concern about nature will make you a pariah. Sadly, but obviously, neither get along. Wayne's friend is Dirty Joe (Lee Tockar) and the girl that has a crush on him is Wendy Winkle (Jayne Paterson), though he hates her. His enemies are Miss Hillary Hissy (Cathy Weseluck, who also plays Tony's mom, Lily, and Mrs. Winkle) and Lucien's friends are Tony Parsons (Terry Klassen who also plays Tony's dad, Seth) and Mari and Luke Harrison (Adam Little).

The series is notable for being one of the few cartoons to mix familiar Los Angeles voice actors (Tom Kenny, Kath Soucie) with Canadian actors from The Ocean Group (Ian James Corlett, Nicole Oliver, Lee Tockar).

The series premiered in the UK on September 3, 2001 on Cartoon Network (UK) and later on CBBC on BBC One respectively and reached high popularity with children.