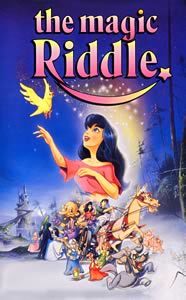 The Magic Riddle is a 1991 Australian fantasy musical animated film directed by Yoram Gross. The story follows Cindy (inspired by Cinderella), a servant to her wicked stepmother and stepsisters who desires to have love. Along the way, she goes through a bunch of parts of different fairy tales, being narrated by an old woman who keeps on mixing them up, combining into her own story. The film was first released in Australia in September of 1991, and eventually had a theatrical release in the Phillipines in 1994. The film has since been criticised for it's jumbled story, less than favourable animation and being a carbon copy of different Disney films that preceded the movie.

The Magic Riddle provides examples of: