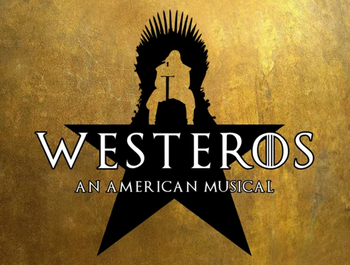 Look at the picture and try guessing which two works are being combined
"Fools who trust too much soon wind up dead."
—Littlefinger, "Small Council"
Advertisement:

Westeros: An American Musical is a musical parody of A Song of Ice and Fire and its live-action TV adaptation Game of Thrones, set to music from Hamilton.

After losing his Hand of the King and foster father Jon Arryn to disease, King Robert Baratheon enlists his foster brother Eddard Stark as his new Hand. Eddard soon discovers that Robert’s younger biological bothers Stannis and Renly are the true second and third in line for the throne due to all three of Robert’s supposed children actually being the produce of his wife’s Cersei’s affair with her own brother. Unfortunately, the Decadent Court claims both Robert and Eddard’s lives almost as soon as the news starts spreading. In their wake, Cersei and her family do their best to keep her oldest son Joffrey on the throne. Meanwhile, Stannis is ready to take the seat that is his by force, and Renly’s boyfriend has a sister with eyes on the Queen’s crown.

The play focuses mostly on the events in King’s Landing and the Lannisters, with Stannis and his entourage being a close second. Robb Stark, Daenerys Targaryen and Jon Snow’s storylines get minor focus, while the rest range from brief mentions to complete absence. The play doesn't have much of a Fourth Wall, either.

There are two versions of the play on the creator’s YouTube channel. The first, released in a song-by-song format, was performed in 2018 and covers events from A Game of Thrones and A Clash of Kings to the tune of songs taken from the first act of Hamilton. The second, performed in 2019, was released as two videos: Act I that is an expanded rework of the 2018 version, and Act II that covers events from A Storm of Swords with tunes mostly taken from Act II of Hamilton. There is now a sequel, Queens, adapting A Feast for Crows and A Dance with Dragons and the corresponding seasons of the TV show, set to music from Six: The Musical.