Roleplay / A Sword Without A Hilt 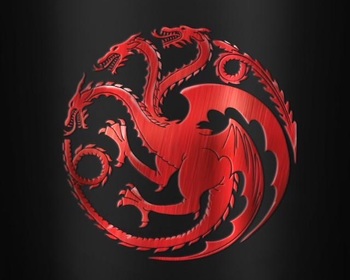 Fire and Blood
In a world where magic has all but guttered to ashes, becoming the fare of charlatans, petty conjurers, and ragged illusionists, a mighty change is stirring. From small and fragile sparks a great blaze will be reborn and men will again look in wonder awe and terror at those who would dare to call on secret powers. Heroes and fiends, champions and monsters, soon all will walk under the light of common day once more.

A Sword Without A Hilt

is a roleplaying Quest by the author DragonParadox

, posing the question what would happen to the world of Planetos if magic did not slowly return, but came back in force. The quest is a crossover with D&D 3.5 and expands upon the many allusions and shout outs found in the backstory of the source material. Devils and Demons begin to enter the world, using artifacts left behind by the Valyrian Freehold or exploiting the many gaps in the knowledge left behind by them to ensnare mortals. Meanwhile, the Illithid begin to stir in their fortresses under the seas and the many relics they left behind on the world regain their fell power.

The quest follows the actions of Viserys Targaryen in this rapidly changing world, starting right after the death of his last protector Willem Darry. Awakening his power as a dragon-blooded sorcerer, he sets out to find a safe home for his sister and himself in the seedy parts of Braavos, always fearing assassins sent by Robert Baratheon to strike at them while they are defenseless. He dreams to reclaim the Iron Throne, but it will be a long way indeed from Braavos gutters to the Red Keep.

The quest is hosted on Sufficient Velocity.com. It has been going since March 2016 and updates multiple times per day, thus having amassed over 4.7 million words by now, eclipsing even the length of the source material. Around its core players, a distinct community has emerged over the years, which is much more cooperative then player-bases of many other quests and sometimes referred to as Proto-Tribe by the players themselves.

A Sword Without A Hilt provides examples of: