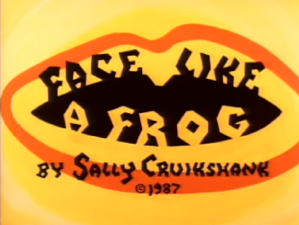 A very surreal animated short by Sally Cruikshank (the same animator behind Quasi at the Quackadero). It's about a frog named Max who is enticed by a female frog named Gluey into entering a haunted house. Or something.
Advertisement:

It has a score by Danny Elfman and Oingo Boingo. It can be seen in its entirety here