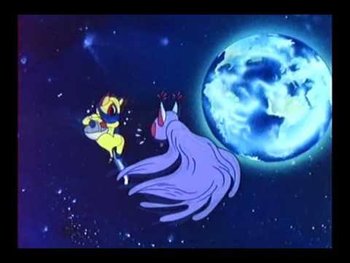 How can something be Adorkable and invoke Uncanny Valley at the same time?
Fantadroms is a Soviet Latvian cartoon series that was created by Studio Dauka and aired for 13 episodes from 1985 to 1995note similar to Nu, Pogodi!, episodes of Fantadroms were produced and aired much more sporadically than other cartoons, resulting in months' worth of time between episode airdates.

The show was about a yellow shapeshifting cat robot named Indrikis, who was created by a space station to check on an Earth-like planet and stop any conflicts that might be going on between the planet's inhabitants. His friends are Receklite, a purple female shapeshifting cat robot, and an unnamed female rat. There is also an assortment of recurring supporting characters, such as a light blue boar and a floating pink blob, among others.