Film / The Oogieloves in the Big Balloon Adventure 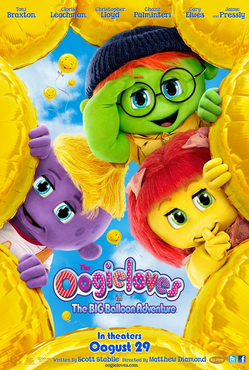 Oogie-what...?
Voiceover: Please be reminded that once the show starts, if you plan on talking, if you feel like singing, and if you can't stop dancing...
Toofie: Then you're in the right place!
The Oogieloves: We're the Oogieloves!
— From one of the movie's trailers
Advertisement:

From Kenn Viselman, the marketing genius (not creator) behind such franchises as Teletubbies, comes the adventuriffic 2012 kids' film The Oogieloves in the Big Balloon Adventure, based on costumed characters in a 2009 series of PSAs, who in turn were based on characters from an obscure 2004 kids' show called My Bedbugs

, whose rights were sold off to Viselman by its owners as their production company was about to be shut down during the 2008 economic meltdown.

As Goobie, Zoozie, and Toofie work with their friends J. Edgar the vacuum cleaner, Windy Window, and Ruffy the Goldfish to organize a surprise party for their friend Schluufy the Pillow, J. Edgar trips and loses the last five magical balloons in all of Lovelyloveville, setting the Oogieloves to find them all in time. Along the way, they meet a variety of characters (including a polka dot-obsessed woman played by Cloris Leachman and a cowboy/mariachi played by Christopher Lloyd) who help them out in their quest.

The Oogieloves came about after Viselman saw Tyler Perry's Madea Goes to Jail and observed the audience shouting advice to the characters. He figured he could work backward from that idea by making an interactive aspect with a children's movie around it, with auditory and visual cues telling kids when to sing, dance, and respond to the on-screen action, as well as when to sit down.

It is considered by many to be one of the biggest box office bombs of all time, underperforming Delgo in its opening weekend as one of the lowest-grossing wide-release films. It eventually made more money in its lifetime than Delgo, as Delgo only appeared in theaters for a single week, while Oogieloves lasted 23 days, grossing only $1 million against a $20 million production budget.

No, I mean the megaphone! That's just stupid what you said.

No, I mean the megaphone! That's just stupid what you said.