Recap / Doctor Who S9 E2 "The Curse of Peladon" 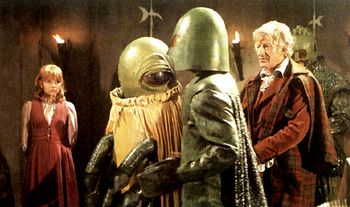 "DOCTOR. I CAN SEE THE FUTURE. DOCTOR, IT'S NOT PRETTY."
"There is no plot! I am being completely honest with you."
— King Peladon is perhaps being a little harsh on the writers.
Advertisement:

Written by Bryan Hayles. This four-episode serial first aired from January 29 to February 19, 1972.

The Doctor thinks he's managed to fix the TARDIS at long last. Taking a test flight, he and Jo find themselves on the planet of Peladon, where a new king is about to be crowned and the Galactic Federation are assessing the planet for entry. Only the human delegate is missing - so of course the Doctor is immediately assumed to be him, a role he dives into with enthusiasm.

The other committee members - the giant, camp, eyeball-octopus-thing Alpha Centauri, Arcturus the Brain in a Jar, the Ice Warrior lord Izlyr and his subordinate, Ssorg - are worried about the death of Chancellor Torbis, the new king's advisor. High Priest Hepesh opposes entry into the Federation and attributes Torbis's death to the displeasure of Aggedor, the sacred monster of Peladon, who is most certainly not a much bigger ALF. The Doctor, meanwhile, concludes that a saboteur is at work.

Initial suspicion naturally falls on the Ice Warriors - after all, they've been villains twice already - but of course it's Hepesh himself. Arcturus, one of the delegates, has convinced Hepesh that the Federation will exploit Peladon for its mineral wealth, whereas in reality his own government plan to do so once Peladon has rejected entry. Ssorg, defending the Doctor, kills Arcturus, but Hepesh gets away, fleeing into a network of tunnels behind the giant statue of Aggedor.

Hepesh leads a coup and attempts to force the king to reject entry into the Federation once and for all. The Doctor arrives with the real Aggedor, a mountain beast thought extinct which Hepesh had trained to obey him, and which he had used to spread the story of the curse. Hepesh orders Aggedor to kill the Doctor. But the Doctor has already met and befriended Aggedor via hypnosis, and it turns on Hepesh instead.

Peladon tries to convince Jo to stay and marry him, having fallen in love with her over the course of the story. Jo reluctantly declines, though has enough second thoughts that the Doctor must talk her into returning to Earth. They head off to watch the coronation before their departure, only to run across the other delegates meeting with the actual Earth delegate, who has arrived late and is indignant that someone has been impersonating her. The Doctor and Jo beat a hasty retreat to the TARDIS, where they VWORP away just as the delegates enter the room looking for them.

This story would mark the final appearance of the original TARDIS interior, which had been present since the show's premiere in 1963. By this point, the production team had already decided to refurbish the set, and as the interior was only needed for a single, brief scene in this serial, it consisted only of the portions that were absolutely necessary. The TARDIS interior would get its first attempted redesign in "The Time Monster" at the end of this season before seeing another renovation in "The Three Doctors" that simply modernized the old set (among other things ditching the matte print wall, which was more conspicuous on higher-resolution colour monitors than the dingy black and white televisions that were commonplace a decade prior).