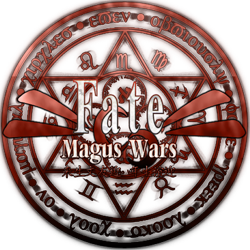 The War between mages has begun.

Eighteen months have passed since Shirou Emiya and his Servant, Saber, destroyed the Holy Grail. What, at the time, was a heroic and noble act quickly proved to have unintended consequences: without the Fuyuki City Grail Wars as a battleground for Magus families to prove their superiority, tensions in the Magus World quickly began boiling over. With no other release, the discord soon escalated into all-out war in the West. The families turned against each other, fighting and slaughtering whilst Mages of every rank and station were forced to kill or be killed.

Now, far to the East, the War has reached its origin: Fuyuki City. For reasons few understand, the Servant and Master system is once again operational - without the restrictions of the previous wars, allowing an unlimited number of Servants to be summoned to fight and kill for whatever whims their Masters desire.

No Magus is safe.

Welcome to the Magus Wars.

Has a Character Page. The site chatbox serves as both an in-character chatbox and a community chatbox. Most of the time, in-character events will be short, usually involving dialogue between characters that may or may not be likely to happen in roleplay.

The main roleplay provides examples of:

The cbox provides examples of: