Film / The Nutcracker in 3D 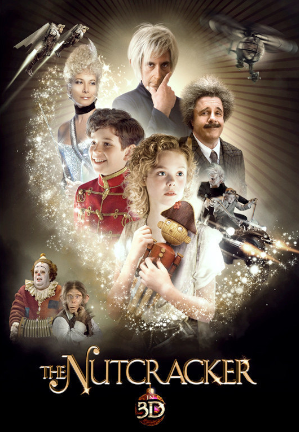 The Nutcracker in 3D, also known as The Nutcracker: The Untold Story on DVD, is the 2010 film version of the classic story and ballet directed by Andrei Konchalovsky and starring Nathan Lane and Elle Fanning.

As per the original story, young Mary receives a nutcracker doll from her uncle come Christmas Eve, which turns out to be a young prince who was turned into a doll by the evil Rat King when his army overthrew his kingdom. Now the Rat King and his army have the prince's subjects underfoot, all the while burning toys in a bid to blot out the sun with the resultant smoke, in hopes of making the world safe for ratkind forever.

Naturally, it's up to our heroes to stop them — even as Mary's quest is hobbled by the rest of her family's disbelief that it isn't All Just a Dream she's having.

The Rat King sings about how the rats will create a new dark era.

The Rat King sings about how the rats will create a new dark era.