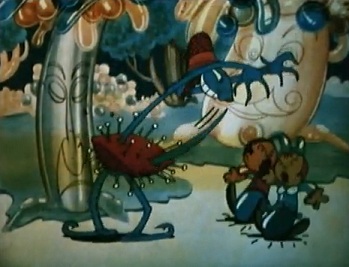 "HA, ha! So you're not afraid of pins?"
I'm the ol' Pincushion Man!
Terror of balloony land!
Folks all hate me,
How they hate me!
Tickles me the way they rate me!
Always have a pin at hand!
Thats the reason I am panned!
How I stop 'em,
When I pop 'em!
RHAH HA HA HA!
—The Pincushion Man's Villain Song.

"Balloon Land" (AKA "The Pincushion Man" in Castle Films reissued prints) is a 1935 short in the Comi Color Cartoons series, directed by Ub Iwerks.

The short begins with an establishing shot of the eponymous town, populated by many sentient balloon people and animals. Soon after, we are introduced to an unnamed boy and girl balloon, who have just been filled up and ready to go, but are warned by a local patron (in song) about the dangerous Pincushion Man, who lies outside the town in the forest. Ignoring his warnings, the boy balloon hops off to challenge the pincushion man, dragging the girl along.

Not long after arriving in the forest, we are introduced to the villain, the eponymous Pincushion Man, a personified walking safety pin, with a pincushion (fittingly stuffed with a large amount of pins) attached to him. After his Villain Song (voiced by Billy Bletcher) he finds the kids and gives chase, and, after tricking a local into opening the gate, begins attack on the town's inhabitants!

This short has fallen into the Public Domain, and can be found here

, among other places. Not to be confused with the infamous 1965 live action children's movie Fun in Balloon Land, whose title location was courtesy of Philadelphia Thanksgiving parade balloons.