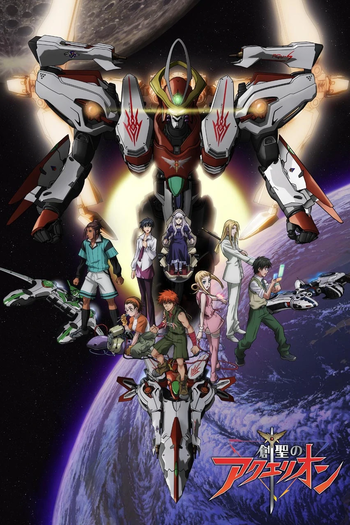 This is a tale about a group of teenagers with Psychic Powers piloting an orgasm-powered combining Super Robot to fight evil Shadow Angels from Atlandia who feed on human lifeforce...

...but that's a little too far on the simple side of things. Let's try again!

Twelve thousand years ago there was a great war between humans and Shadow Angels; the humans won, in no small part thanks to Apollonius, an Angel who turned against his own people out of love for Celiane, a human woman, and the Angels became dormant under the South Pole.

Flash forward to 20 Minutes into the Future. Eleven years after a catastrophe known as the Great Incident ravaged Earth and gifted a few young people with Psychic Powers, the Shadow Angels awaken, and start harvesting humans all around the world. Ordinary militaries are unable to stop them, and it's up to the aforementioned young people (referred to as "Element Users") to stop the Angels, using an ancient Atlandian weapon: the Aquarion, a Humongous Mecha which is the combination of three different flying machines called Vectors (causing the three pilots to join their souls and spiritual bodies into one).

As soon as the Aquarion pilots first engage the Shadow Angels, however, they promptly get their asses handed to them, and crash-land near the place where two Element Users were investigating rumors of a possible reincarnation of Apollonius. The supposed reincarnation, Apollo, climbs into the robot and pilots it to a first victory against the Shadow Angels, losing his True Companions to them in the process. He then joins DEAVA, the organization which handles the Aquarion and Element Users, in the hopes of finding his friends and bringing them back.

The series was created by Shoji Kawamori, the designer of the Valkyrie and the Nirvash typeZero amongst other mecha, and was animated by Studio Satelight. Hence why the titular robot looks so awesome.

A two-part OVA (entitled Wings of Betrayal and Wings of Glory, respectively), was released after the series, taking place in an alternate timeline.

A movie, Wings of Genesis, was also released. It recycled the plot and footage of the OVA and a few other goodies. Released with the movie was a comedic short film featuring the characters from the original series.

A sequel began airing in January 2012. Entitled Aquarion Evol, it takes place 12,000 years after the first series, chronicling a battle against new enemies from another dimension.

In July 2015, a new television series, Aquarion Logos, began airing. Before it, an OVA crossover with Evol was released.