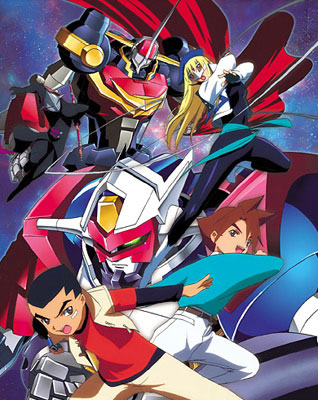 GEAR Fighter Dendoh is a 38-episode Super Robot anime directed and written by Mitsuo Fukuda and Chiaki Morosawa, a husband and wife team more (in)famous in America for Gundam SEED and Gundam SEED Destiny, along with Yasuko Kobayashi, a Tokusatsu writer known as a head writer for Mirai Sentai Timeranger and Kamen Rider Den-O.

Dendoh tells the story of an Alien Invasion of Earth by mechanical aliens known as the Galfa and two elementary school kids, Hokuto Kusanagi and Ginga Izumo, who are chosen to fight them by a giant kung fu robot called Dendoh. As chosen pilots of mankind's last, best superweapon, they are recruited by the organization GEAR to repel the invaders.

As people familiar with Super Robot Genre anime can tell, Dendoh is pretty standard for the genre, and intentionally so. Where it excels is in its storytelling - not being Strictly Formula- and its likeable cast of characters and their relationships. And of course, tons of Shout Outs.

The show's other major distinguishing point is that it's something of a Buddy Cop Show: Hokuto and Ginga are complete opposites (the former is an introverted nerd, the latter is a boisterous jock) but they're forced to work together because only two people working in tandem can pilot Dendoh.

A sequel was planned at one point, but when that fell through the staff released plot details, character, and mecha designs onto the Internet for all to see.