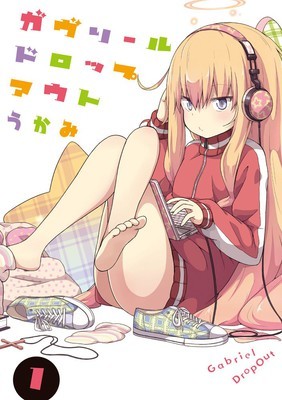 Upon graduating from a school in heaven, angels are sent down to Earth, where they must learn about humans and guide them towards the correct path in order to become true angels. However, Gabriel "Gab" White Tenma, the top angel in her class, becomes addicted to video games upon arriving on Earth and turns into a complete slob as a result. The story follows Gabriel, along with her circle of friends comprising fellow angel Raphiel, and two demons, Vignette and Satanichia, as they attend high school.

Gabriel DropOut (ガヴリールドロップアウト) is a Japanese manga series written and illustrated by Ukami, which began serialization in the shonen magazine Dengeki Daioh G since 2013, has spawned six volumes as of May 25, 2018; the English release is licensed by Yen Press. A spinoff focused on Tapris, titled Tapris SugarStep (タプリスシュガーステップ), premiered on August 27, 2018, with illustrations by Bafako.

An anime adaptation directed by Masahiko Ohta for Dogakobo (the same main staff and studio were responsible for fellow slacker schoolgirl series Himouto! Umaru-chan) aired as part of the Winter 2017 Anime season, and ran for 12 episodes. An Original Video Animation episode aired on March 24, 2017, and a second aired on May 24, 2017. Crunchyroll has the first 12 episodes here