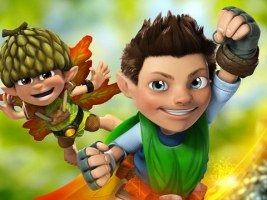 Tree Fu go!
Tree Fu Tom is a British children's animated television series which is aired on Cbeebies. Unlike most TV shows, Tree Fu Tom encourages physical activity through the use of "Tree Fu".
Advertisement:

The series is set in a fictional village named Treetopolis, and revolves around the title character, Tree Fu Tom, and his friends. The voice cast of Tree Fu Tom includes Sophie Aldred, David Tennant and Tim Whitnall.