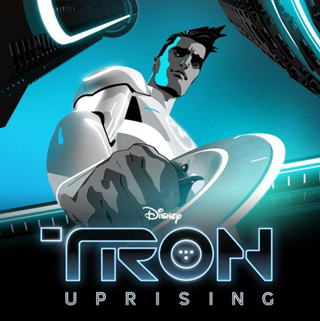 Will he be the next Tron?
Tron Lives.
Advertisement:

TRON: Uprising is a Disney XD series set in the world of TRON. A prequel to TRON: Legacy, the series takes place during the early cycles of Clu seizing power over the Grid. After defeating Tron and leaving him for dead, Clu has begun to take over numerous cities in the Grid. In Argon City, a young mechanic named Beck (Elijah Wood) decides to fight back when Clu's soldiers derez one of his friends. Taking on the identity of Tron to try and inspire revolution, he draws the attention of the real Tron, scarred and in hiding. With Tron's guidance, Beck fights the forces of one of Clu's top generals, Tesler (Lance Henriksen), and attempts to liberate the city and the entire Grid itself.

The series began with a 10 episode microseries alternatively shown as a full thirty minute special, with the series proper run beginning on June 7, 2012. A hiatus went into effect after the seventh episode, with new episodes scheduled for October, then again three episodes after that, resuming in December and moved to a midnight timeslot on Mondays for its final episodes. (The show hasn't officially been cancelled, but no episodes have been produced since January 2013.)