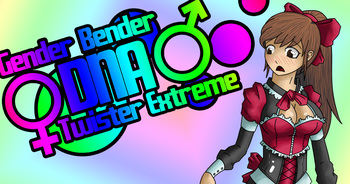 The title, and a member of in-story lab Abaddon Pharmaceuticals
Advertisement:

Gender Bender DNA Twister Extreme is a visual novel game by Transcendent Studios, available on PC via Steam. A lab explosion brought about by a mad scientist's experiment gone awry turns everyone in the lab and the nearby area into women, and after some time working on trying to fix it, they learn that the changes are permanent. Over the course of three in-game years and chapters with perspectives from 13 different characters (not all of whom were present for the initial accident), learn what happens to this Australian town that has been forever changed in more ways than one.

One of the game's developers later made three other games that take place in the same setting of Axon City, Australia: Max's Big Bust: A Captain Nekorai Tale, Alluna and Brie, and Max's Big Bust 2: Max's Bigger Bust.