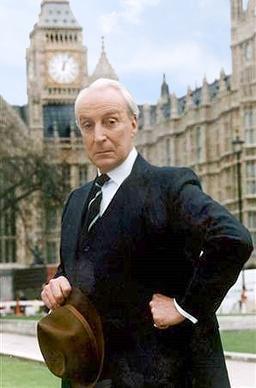 Ian William Richardson CBE (7 April 1934- 9 February 2007) was a Scottish actor. His most prominent role was Francis Urquhart in the original House of Cards. He also played Sherlock Holmes in televised productions of The Hound of the Baskervilles and The Sign Of Four. Later in his career, he would play Arthur Conan Doyle's real life model for Holmes, Dr. Joseph Bell (Doyle's old medical professor) for the historical-fiction BBC mystery drama, Murder Rooms. His films included Brazil, Dark City, 102 Dalmatians, From Hell and Joyeux Noël. To American audiences, he is probably best known as the man asking Paul Eddington if he has any Grey Poupon

His son Miles Richardson is also an actor, best known for playing EU Doctor Who character, Time Lord Politician Irving Braxiatel for the Big Finish spin-off, Gallifrey. Coincidentally, the elder Richardson himself was previously one of the Doctor Who team's top picks for the role of the Eighth Doctor, alongside Richard Griffiths, before the show's cancellation in 1989; the role of Eight would ultimately go to Paul McGann in the 1996 TV movie.