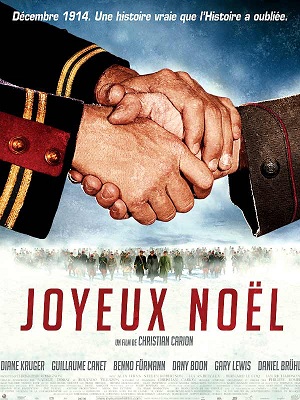 A moment of peace in a war that never ends.
Joyeux Noël (Merry Christmas) is a 2005 film depicting the Real Life Christmas Truce of 1914, in the first year of World War I.
Advertisement:

French boy:
Child, upon these maps do heed this black stain to be effaced
Omitting it, you would proceed yet better it in red to trace
Later, whatever may come to pass promise there to go you must to fetch the children of Alsace
Reaching out their arms to us
May in our fondest France Hope's green saplings to branch
And in you, dear child, flower
Grow, grow, France awaits its hour.
British boy:
To rid the map of every trace
Of Germany and of the Hun
We must exterminate that race
We must not leave a single one
Heed not their children's cries
Best slay all now, the women, too
Or else someday again they'll rise
Which, if they're dead, they cannot do.
German boy:
We have one and only enemy
Who digs the grave of Germany
Its heart replete with hatred, gall and envy
We have one and only enemy
The villain raises its murderous hand
Its name, you know, is England.
Advertisement:

Hearing such words from the mouths of children is of course horrible, explicitly showing us how the war developed on ethnic and national rivalries or hatred. The film proceeds, introducing us to its British, French and German characters who join up as the war breaks out. William and Jonathan, two Scottish brothers, along with their priest, Father Palmer, who joins as a chaplain, French Lieutenant Audebert (Guillaume Canet) and German tenor Nikolaus Sprink who is engaged to a Danish soprano, Anna Sørensen (Diane Kruger), reluctant to see him go. The characters are sent to the Western Front and face each other in the trenches.

On Christmas Eve, all sides decide to call a truce. Father Palmer presides over a service, Nikolaus and Anna sing carols, a football match is played, and soldiers from all sides share food and photos of their loved ones. However, when news of the fraternization across lines begins to leak out, the commanders worry that it could hamper the war effort, and take extreme measures to put a stop to the fragile peace.